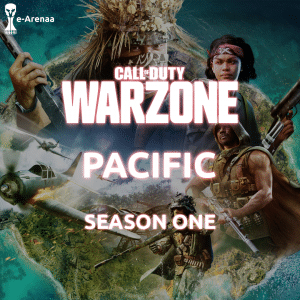 The new COD Warzone Pacific all about the new map

Call of Duty Warzone ushers in its third Season 1 starting December 8, 2021. This time there are big changes. With the new map Caldera, which has been adapted to new Call of Duty Vanguard. In addition to the map, there are also new vehicles and weapons, which we will also discuss.

All about the update

You can start downloading the update for the game from December 8, 2021 at 6am. Depending on the platform, the download time will be different. For the PC player, it is about 37.8 GB, the PS5 and PS4 consumers can expect about 44.7 GB. The Xbox One player can expect 41.2 GB. Only the players who also have Vanguard can start right after downloading the rest can only start from December 9, 2021.

The biggest change in the map is that the old Verdansk map has been replaced with the new Caldera map. The new Caldera map is located on the Pacific Ocean and is visually beautiful. Compared to Verdansk, the new map is a bit bigger, and the creators have packaged the new map in the look of World War II. Thanks to palm tree beaches and deep blue sea, there is almost a bit of a vacation feeling, which will probably change when the bullets start flying around your ears. Still, it’s a good difference from the old map and certainly very interesting after two years on Verdansk. The official roadmap for the season offers an overview of all the important new features.

Everything about the new weapons and vehicles

Since they included Call of Duty Vanguard, there are 38 weapons from Vanguard and 5 more weapons, 3 of which are from the Battle Pass of Season 1. To the classic Battle Royal, there is also a mode called Vanguard Royale. In this mode there is only the option to play weapons and loadouts from the Vanguard era, even your skins must be from Vanguard. Also the vehicles in this mode are including only from Vanguard, that means you can even eliminate your opponents with a fighter plane or an anti-aircraft gun. There are also changes in terms of Perks, deadly silence is weakened. The throwing knife is made stronger, with a single hit you can eliminate your opponent. Stun grenades and heartbeat will be weakened.

All about the new Gulag system

There are also slight changes in the Gulag. After winning a Gulag duel, when you return to the battlefield, you will receive the equipment you had in the Gulag, with the proper remaining ammo.

All in all, we’re pretty excited about the new Call of Duty Warzone Pacific. Surely, in the course of the next season, many things will be adapted and responded to the wishes of the players. We are curious how the new weapons will turn out on the new map. What do you think of the new map, the weapons and everything else that goes with it?