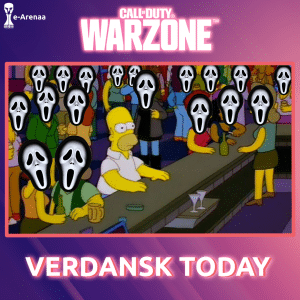 The new Halloween event in Call of Duty Warzone

Horror fans will once again get their money’s worth in Call of Duty Warzone this year. The new Halloween event The Haunting 2021 started on October 19 and brings a lot of new content to the game. In addition to the Halloween event, weapons have been buffed. Call of Duty Cold War also has a new map and three new modes to go with Halloween. The update will take a little longer, but it is 100% worth it.

The new Halloween event has already started on October 19 and will probably last until November 2. You can buy for example a Scream bundle for the equivalent of €25. In this bundle is the famous skin from the movie Scream inside. And various banners, posters, weapons equipment. You can also buy another bundle in which you can also purchase from a famous horror movie film classic Donni Darko. Halloween skins for other operators like Necro Queen or even Ghost of War you can purchase.
In addition, as always, there is content to be found only in Warzone, or Cold War respectively.

The new moduse in Call of Duty Warzone

In Warzone, there is a new mode called Ghosts of Verdansk. This mode is somewhat reminiscent of last year’s Zombie mode from the Halloween event. At the beginning of the mode, you have a fear value that is 0 at the start of a game and can increase up to 100. The value increases by different factors. For example, if you get hit, your teammates die, or you just camp somewhere, the value increases. If you die, you won’t go to the gulag. Instead, you become a ghost.

When you are a ghost, you no longer have weapons, but you have different powers. As a ghost, you can jump very high and float down from any height. Among the powers, you can also make phone calls or float through enemies. You can slow down your enemies when you float through them, or slow down the vehicles as well. If you eliminate three enemies, you can revive yourself with their souls.

In Cold War, there are also different Halloween modes. One of them is the infected mode. By having 18 players compete against each other, one team is infected, and one team remains human. If time runs out and the human side survives, they win. If it is other rum, the infected team wins. Prop Hunt Halloween mode is about hiding as an item on a map. Be it as a pumpkin better or table, the other team must find you one always takes turns. The team that has the most points at the end wins. In Scream Deathmatch is about two players as a killer Ghostface from Scream. They have to find the unarmed opponents and eliminate them in a certain time. The spectacular thing about it is that the players being chased sometimes scream, drawing attention to themselves.

We are thrilled with the entire event, as the makers of Call of Duty have put some thought and variety into the game. In our opinion, we find the Ghosts of Verdansk the most exciting, but the other modes are also extremely entertaining. We are already looking forward to Call of Duty Vanguard, which will be released on November 5 and about which we have already written an article. Which mode do you like best?