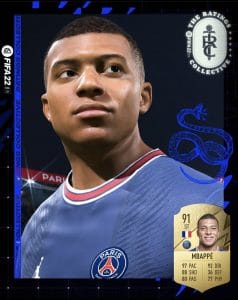 Soon it is so far, FIFA 22 finally comes on the market. Like every year before the release, gamers were interested in which player gets the best rating. EA has presented us the top 22 players with all ratings and overall strength. Which are these 22 players, we will show you.

Also this year there will be a best map in the game. For Fut Ultimat or even for the career mode this information is very interesting. Messi gets the strongest card in FIFA 22 with a total strength of 93. The Argentine who just changed to Paris Saint German will probably be one of the most expensive cards in FUT Ultimat. The second place gets Robert Lewandowski from FC Bayern Munich with a total strength of 92. He is not the fastest but his other statistics are very high. Third place is shared by five players.

Christiano Ronaldo who has just moved to Manchester United. Has been given an overall strength of 91 by Fifa. He will probably again in Fut Ultimat one of the most expensive cards in the game. Kylian Mbappe and Neymar from Paris Saint German got exactly the same 91 total strength. And will be quite expensive as well. But also Kevin De Bruyne got a 91 total strength and will surely be very popular with most gamers. Last but not least, Oblak from Atletico Madrid also got a 91 total, making him the best goalkeeper in the game.

To bring the top 10 to a close. Let’s continue with four players who each got an overall score of 90 from FIFA. Kante from Chelsea FC who will probably be very expensive for gamers again. Kane of Tottenham the striker again like last year did not get the highest PAC. Neuer from FC Bayern is probably, as in most FIFA parts again very strong in goal. And last but not least, with a total strength of 90, the German goalkeeper from FC Barcelona Ter Stegen.

The top 22 players that FIFA has released makes us hornier for FIFA 22, we can’t wait to finally get started. It’s clear that for some gamers the stats don’t fit to some players. Or even some overall strength is too much or too little. But you mustn’t forget, at the end of the day we love FIFA the way it is and it’s just fun to play. What do you think about the presented maps?