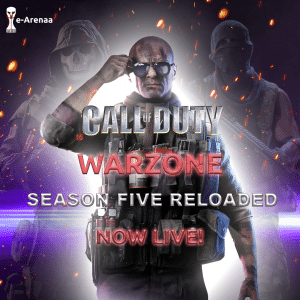 After the launch of the new Warzone season a few weeks ago, it’s now time for the Season 5 Reloaded update. Raven Software released the new version on September 9th & brought many variations of updates. Those include new modes, operators & news about the Numbers Event, to the world of Verdansk.

After weeks of teasers we finally have confirmation on The Numbers event. Mobile Broadcast Stations will soon be the focal point and you’ll have plenty to discover in both Verdansk and regular multiplayer. This event will also include a set of nine challenges in Warzone, which are based on reinstalling mobile radio stations active in Season 5. Through these challenges, you can unlock more cosmetic rewards, as well as more rewards and another arcade game for your collection. Starting on September 21st, complete a full set of nine challenges in any game to unlock Sai, the first event reward weapon.

CLASH – This is an epic team Deathmatch: 50 vs. 50, access all equipment, ping and armor systems, cash, purchase sites, and vehicles through regular battle royale and heist modes. Prepare for the largest team battle in Warzone. Consider upgrading your equipment-you can immediately access and use your favourite weapons to upgrade. You can level Black Ops Cold War and Modern Warfare® weapons as-well and complete challenges.

IRON TRIAL ’84 – Only the strongest survive in the toughest Battle Royale mode ever in Verdansk! Raven Softwares has come up with something very special with the new Iron Trials’84 mode:

We will reveal the full extent of the changes as we get closer to the update that will include Iron Trials ’84. All in all, awesome modes in the Season 5 Reloaded Update.

The previously dormant Mobile Broadcast Station seems to be cheering up. People suspect that they will soon start zooming in on the tapes of the Dragovich Project-A.K.A. Numbers Broadcasting-throughout the area.

You can find all the news and updates regarding the weapons in our next article. Raven Software has put in a lot of effort and offers all gamers cool modes, features & variety. We are looking forward to the Numbers event & everything else!