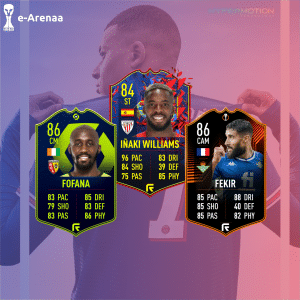 The best FUT22: Squad Building Challenges you should do

Meanwhile, the release of FIFA 22 is almost one month over. In Fut Ultimate, it is important to have a good and strong team to get into the weekend league. The last article, we told you about the new system of the Weekend League on e-Arenaa. In every FIFA part it is important to finish SBC’s to get strong packs or strong players. Also, this year some SBC were already released, we show you the best Fut Squad Building Challenges players you should do.

The first record breaker in FIFA 22 is Inaki Williams from Athletic Bilbao. Inaki Williams has been on the pitch for 203 consecutive games for the Basque club, setting a new record in soccer history. FIFA has rewarded this with a record breaker card. Unfortunately, the SBC for Inaki Williams has already expired, but the players who made it can consider themselves lucky. For us he is one of the best Fut Squad Building Challenges players at the moment. With an overall rating of 84 and his speed of 96 and a shot of 84 he will surely strengthen your team in the attack. The downside to this card is unfortunately that he got 2 stars Weak Foot. This, of course, is not very good for a striker. Nevertheless, we think that you can play him very well. The cheapest option for the SBC solution costs just under 110,000 coins.

The Player of the Month September in Ligue 1 has been won by Seko Fofana from RC Lens. As every year, players get a POTM card to go with it, which can be done as an SBC. The POTM special card gives Fofana an overall rating of 86, compared to his regular gold 78 all basic values increase. Physicality 86 and dribbling 85 stands out, but pace 83, passing 83 and defense 83 also crack the 80 mark. Only the shot with 79 is not straight, but the best is solid. To get Fofana as a Ligue 1 POTM, you have to complete his Squad Building Challenge by November 21. The cheapest solution costs just under 140,000 coins.

Road to the Knockouts Nabil Fekir

With the event Road to the Knockouts, Nabil Fekir got a special card from FIFA. His Europa League card could be done as SBC and cost about 100,000 Coins. With his overall rating of 86, the Real Betis attacking midfielder is a boost for your team. His stats are all over 80 his pace is 85,his shot is 85, his passing is 85 and his dribbling is a strong 88 even his physicality is 82. The big bonus in this card is also in a possible upgrade. Should his team Betis Sevilla reach the knockout stage of the Europa League, this card will even get an upgrade and his values will increase.

For us, these players on this list are one of the best Fut Squad Building Challenges you should do. Of course, it’s up to you which SBC you think is the best for your team. We are sure that there will be more SBC to come, so stay curious what FIFA 22 has to offer for us. Do you agree with us, or would you put other players on this list?